Home » Corona as a Chance for System Change: 5 Suggestions from Tamera

Corona as a Chance for System Change:
5 Suggestions from Tamera

We’re living in times in which things are happening we didn’t think were possible up until recently. We see the worrying developments towards totalitarian societies. We see communities and societies across the globe experiencing losses of loved ones in great and growing numbers, as well as widespread chaos, the disruption of support networks and a shortage of necessities. We see that this disproportionately impacts elders and historically marginalized populations. We see misery, fear and loneliness as so many are restricted to isolation and quarantine. We see health systems overwhelmed, and support staff overworked and underpaid. But we also see many examples of courage and solidarity. And we experience nature taking a deep breath of relief. What will all this lead to? Will we return to everyday normality in any foreseeable future? Or will we as humanity seize this opportunity for a deep system change? Will we make a fresh start and build a culture aligned with life? Many friends have asked us what we think about the coronavirus crisis and how we are dealing with it. There are many answers on different levels. In the following, we summarize some of our thought-lines and suggestions for action. 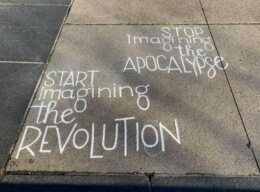 For all those who love life and this Earth, the crisis represents a great opportunity, in addition to all its challenges: now, we have the opportunity to join forces worldwide to achieve a shared goal, develop social cohesion, set up decentralized structures, a solidarity economy – a genuine reboot. In times of such upheaval, it can be easy to become distracted by differing opinions. We invite the consideration that what we do, think and imagine now will help to shape the future.

We believe that a likely outcome of this crisis will be an economic collapse and thus significant restrictions to supply systems. In addition, there’s the danger the crisis will be used to attack democracy and civil rights and to impose totalitarian structures and mass surveillance with the help of modern technology. In some countries (such as China, India, Israel, and the Philippines) we are already observing such developments and the great suffering of those affected. In this scenario, a climate of fear and the avoidance of contact will make social cohesion increasingly difficult – therefore aggravating people’s attempts to organize, offer mutual support and resist human rights violations.

It’s right to act in solidarity now, also regarding the instructions of governments. But when we witness lies, injustice and human rights violations, we cannot remain silent.

In this situation, it’s imperative we work in a constructive direction. Now our global collective intelligence is needed. The situation challenges us all to understand and thoroughly transform the structures of society and our own inner patterns. Some suggestions from our perspective of system change:

The most dangerous and infectious virus is the virus of fear. Undetected and unconscious fears have always triggered defensive behaviors that become solidified in aggression, wars, fascism and the persecution of historically oppressed populations. If we are privileged enough to be able to stop our busyness for a while, let’s use it to understand our fears and disarm them. This also includes a critical approach to information. We know the mechanisms of mainstream mass media and the pressure to think alike, especially in crisis situations. However, it would not be the first time in history that the one single story explaining the situation turned out to be wrong. That is why we must maintain our critical perspective, remain open to other sources of information, and have the courage to say what we believe to be true – while remaining open to hear the views of others.

As a community, Tamera is guided by the ethical principles of responsibility, truth and mutual support. We believe these values to be essential, especially during such times. Now is the moment to ensure that connections and relationships developing in the worldwide community are strengthened, rather than eroded. Above all, let’s not forget those who are suffering most under the crisis. This includes refugees at closed borders and in large camps; all people in tight conditions such as slums; the homeless, street children, and undocumented people, especially in countries with totalitarian tendencies. We invite you to consider how you can act in solidarity from where you are, leveraging your privileges and your voice. Let’s speak out against the restrictions of human and civil rights being imposed in the name of health and safety, and especially to resist any kind of divisive propaganda that blames “others” (especially people of color) for this crisis.

Tamera is currently closed for visitors and so we’re unable to meet our network partners in the region, but we’re committed to keeping in close touch and staying alert for where support and solidarity are needed.

Let’s make ourselves more independent from a collapsing globalized system! Now is the time to strengthen our regional networks and organize our food, water and energy supply as far as possible in a regional and decentralized way. Let’s support the farmers and producers in our region. Let’s grow our own food – always in cooperation with nature. Let’s share the surplus with those who can’t do that. Let’s save seeds. Let’s get to know and care for our water sources. Let’s collect rainwater in local retention structures and swales and use it wisely. Let’s strengthen decentralized energy production through solar and wind power – let’s share information and construct alternative energy technologies together, such as solar cookers and biogas systems for cooking. Decentralization also includes taking responsibility for health, education and communications: we also need independence from global suppliers by establishing reliable regional cooperation in these areas.

The power of the dominant capitalist system is partly based on people’s inability to imagine functioning alternatives. Buckminster Fuller said, “The world is now too dangerous for anything less than utopia.” For those who have access to outdoor spaces, this situation is a special opportunity to rediscover our contact with nature and with life itself. In this time where normality is interrupted, we have the chance to truly ask ourselves: How do we want to live? What does a world look like in which people live together in solidarity and contact with nature and each other? What opportunity do we have to build functioning decision-making and supply structures in food, water and energy? How can we regain lost power to think, to love, to be there for each other? Let’s allow ourselves to connect with these visions, for they are so much more than individual fantasies. They are actually possibilities aligned with an evolutionary direction inherent to life.

Now that old systems are failing, our prayer is that more people will gain a deeper understanding of a possible, shared direction for which we can join forces: a fundamental system change towards a culture of partnership. We believe this includes building communities that dissolve mistrust and historical trauma among themselves and become capable of trust, truth, and autonomous thinking; regions that produce their own food and energy on the basis of cooperation with nature; a deep understanding of the sacred matrix and the Earth as a living being; healing love and reconciliation of the sexes; and cooperation with universal powers – the indefinable mystery to which we all belong. This also includes overcoming old pictures of what an “enemy” is. Even viruses don’t need to be seen as enemies, but parts of the shared body of life, bringing corrections to light that are necessary for healing.

All this encompasses what is meant by the Healing Biotopes Plan. We’re now taking the time to study its basic ideas anew and to deepen them. (From May 11 to 31, we will offer an online course on this topic!)

To conclude, we would like to give you some inspiration from the unpublished essay, “Future Vision” by Sabine Lichtenfels. It was written in 2008 and is very relevant for today. It is a description of a possible future, looking back on the essential changes that were part of the construction of a new nonviolent world. She writes:

“We had no other choice left. The external pressure increased enormously and compelled us to awaken our inner awareness and power for change. The external circumstances forced us to become impeccable. They forced us to discover and develop the place within us where we were truly unassailable. The decisive event, which was even now able to initiate a new future, was the return to the certainty of God’s existence. The luminous quality that we habitually projected into the afterlife is in reality already present in our bodies. A great certainty and joy of being suddenly awoke and motivated us to renew our actions. We knew: If we are able to live a life in which we understand how to end war fully, then this will bring about a new reality.”