Home » News » “We stand in solidarity with Rojava, an example to the world”

Joint Statement in The Guardian:
“We stand in solidarity with Rojava” 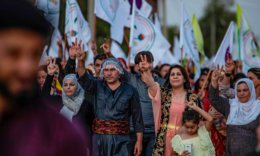 Published on the occasion of the Global Resistance Day for Rojava, November 2, 2019, their joint statement reads,

“What is at stake in north-east Syria is more than the fate of the Kurdish people or the autonomous homeland of Rojava or even the fight against Isis. What is at stake is humanity’s ability to survive our current civilisational crisis and to imagine new alternatives before it’s too late.

Turkish prime minister Recep Tayyip Erdoğan’s brutal invasion of Rojava is using 20th-century techniques of extreme violence and genocide, despite a proclaimed “ceasefire”. Turkey’s air force is raining down napalm and white phosphorus on innocent civilians. At the same time, jihadi squads are massacring fleeing civilians as retribution for Rojava’s fight against Isis and their role as arguably the most important ally to the west in the region.

The US, the UK, France, Russia and other alleged superpowers are actively betraying both international law and the Geneva convention by allowing and facilitating the ethnic cleansing and occupation of Rojava. Turkey’s aim is clear: to eradicate what all fascist powers fear most, a free people daring to create brave and successful experiments outside the globalised, extractive system.

Since 2012, around 5 million people – Kurds, Arabs, Assyrians, Turkmen, Yazidis and others – have built the autonomous region of Rojava, demonstrating how a multi-ethnic society can respectfully coexist beyond the constraints of nation state, patriarchy and capitalism. By promoting radically democratic and decentralised self-governance, equity between genders, regenerative agriculture, a justice system based on reconciliation and inclusion of minorities, the Rojava experiment has presented a living example of possibility under the most impossible of circumstances. We encourage readers to review the Rojavan Charter of the Social Contract for inspiration.

Western leaders are feigning empathy while American, German and British weapon manufacturers are actively selling weapons to Turkey. It is clear that the dominant system cannot and will not defend those seeking to explore other ways of knowing and being. As the imprisoned Kurdish leader Abdullah Öcalan writes: “The real power of capitalist modernity isn’t its money and its weapons, [but] its ability to suffocate all utopias […] with its liberalism.”

However, a growing chorus of allies are rising up around the world. From Haiti to Lebanon, from Chile to Iraq, from Cameroon to the US, from the UK to Hong Kong, social revolutions are confronting the rise of fascism, short-termism, greed, climate destruction and warfare that are required to prop up our existing economic paradigm. The battle lines are becoming clearer. Domination versus cooperation, colonisation versus autonomy, oppression versus freedom, patriarchy versus partnership – these values are the warp and weft of the defining struggle for the future of humanity.

For Rojava to survive and for justice to truly prevail, those rising up in their local context must stand together creatively with shared voice, values and visions for global systems change. Rojava is fighting for the same reasons as the awakening majority from around the world. It has shown that the way out of social and ecological crisis is not through GDP-focused “development”, but rather with decentralised autonomous communities.

Making such communities work in more and more places, by regenerating ecosystems, healing our collective trauma and creating social structures of solidarity and trust, is the transformational work of our times. Once we see our struggles as inherently interdependent with each other, and with the web of life itself, no army on the planet will be able to stop the inevitable transition.

As leaders from social movements, communities and First Nations from around the world, we stand in solidarity with the vision and work of Rojava. We pray for their resilience, protection and perseverance. We pray that we will listen to and learn from the living Earth as she continues to show us how to create societies which live in cooperation with all beings. We pray that those in positions of power be reminded of their humanity and end this invasion immediately.”