“What Does Freedom Really Mean?”
One Billion Rising 2020 with Tamera & the Odemira Women’s Prison

Since 2012, countless groups have been rising every February 14 in dance and celebration to demand an end to violence against women and girls. Tamera participated for the 7th time this year, in joint action with inmates of the Odemira prison establishment. Janka Striffler – dancer, mother, community-builder and long-term co-worker of Tamera – shares some of her experience working with One Billion Rising and the women in prison. She has coordinated the One Billion Rising actions in Tamera since 2013 and currently serves as the campaign’s Portugal coordinator.

One Billion Rising (OBR) is one of the biggest mass dance actions in human history. According to a UN statistic, one in three women and girls will be beaten or raped in their lifetime. That is one billion women and girls! OBR was launched in 2012 by Eve Ensler, playwright (“The Vagina Monologues”), actor, author and activist, to end this massive worldwide cruelty, aiming to mobilize one billion people every February 14 in celebration, joy and dance. Over 180 countries are rising this year.

In Tamera, we joined for the 7th time this year. In 2014, we danced at our cultural center, in the mud. In 2015, we were in our stone circle. In 2017, we went out to the beach in Vila Nova de Milfontes to rise for Mother Earth and against the plans for offshore oil drilling. In 2018, we took to the center of our municipal capital, Odemira, with the students of the local public school of Colos.

“Raise the Vibration, Rise for Revolution”

The motto of this year’s campaign is “Raise the Vibration, Rise for Revolution.” In the invitation, Eve Ensler writes, “We are in the midst of a rising tide of right-wing nationalism, white supremacy, fascism, hatred of and fear of immigrants, climate destruction, […]. What we can do is remember we are many and we can raise the vibration through action, art, connection, imagination and love.

That is why we open the borders of our heart when the state builds walls, detention centers and refugee camps. That is why we reach out to include everyone in our circle of rising as the state creates further and further divisions between us. That is why we devote ourselves to developing trust and solidarity because this bond, once secure, becomes our wings. That is why we move our bodies so that the freedom and energy we shake loose becomes a new energy bringing in a new future. That is why we see, cherish, nurture, respect and protect our Mother Earth as we are not separate from her. Her life is our life.”

Following this call, we participated this year in a joint action with inmates from the Odemira women’s prison. The prison currently holds 55 women. The youngest is the age of my daughter, 23, and the oldest is 67. They’re offered workshops and activities and I feel blessed we’ve had the opportunity to work with them through OBR and to sit in council with them.

The Astonishing Impact of Dancing and Sitting in Circle

The first time I heard about OBR was in an evening presentation at Tamera, in which the Canadian activist and friend Magalie Bonneau-Marcil showed a short video in which women went into a Californian prison and danced the “Break the Chain” choreography with the inmates. I felt such a compassionate heart for this work and knew, “This is what I would love to do!” This was the piece which had been missing in my previous dancing career. I felt like dancing doesn’t change anything in the world, but seeing this video, I suddenly knew the political effect that dancing can have. The missing link I found was OBR, because Eve Ensler called for revolution – not by marching and protesting, but by dancing in the streets, by moving the body, by being joyful, being erotic, being together. This calling joined my passion with purpose – and ever since then, I feel like I’ve tapped into my source. What a gift!

Since November, we, 5 women of different ages and nationalities from Tamera, have spent time with the women of the Odemira prison every Friday.

I can’t recall having ever been as nervous as I was before we first went. I had no idea what was going to happen. My imagination went crazy, “Who will we meet? Will these women listen to me? Will they want to listen to anyone?” After entering, it was such a relief to realize that these women aren’t at all different from me or you. They may have made a bad choice at some point or they may have been too poor to pay their bills – we know we live in a deeply unjust society – but basically, we are all the same. I had known this before, but in this moment, the realization sank deeper. After our first meeting with around 20 inmates, they were just in disbelief, “Will you actually come back next Friday? Will you really be meeting us every Friday?”

I’ve found great inspiration for this work in the accounts of Manitonquat, our late friend, storyteller and wisdom keeper of the Wampanoag Nation. He took his “circle way” into prisons and sat with so many inmates in circle to listen, to show them respect and compassion, to support healing and forgiveness. He writes that an inmate told him after one of his workshops:

“All my life I’ve heard about love, but I’ve never found it. I didn’t believe in it. Never felt it, never saw it anywhere. Not in my family, so-called family, not on the streets. Plenty of sex, but love? And suddenly I am sitting here listening to you all and I’ve got a lump in my throat. These elders here, some of them come a hundred miles, drive hours just to be with us once a week – my mom don’t even do that – and they don’t even get paid for it. And this hits me, LOVE EXISTS.”

And working with these women has indeed felt like a love affair. Sitting in circle has been an act of unity. I learned a great deal about this work from our dear friend and global partner Gigi Coyle. People may be strangers at first, but as soon as you come together, bless the water and pour it into a bowl in the center, something changes, the frequency is different. The women asked me the other day, “What is it that are you doing, Janka? Whenever you do this and speak the dedication, something magical is in the air. What is it?”

We spoke about the feeling of unity, of being in prayer and ceremony. We are sitting there and it’s quiet. And I tell you, it’s rarely quiet in prison. So much is going on, so many reactions and tensions, but suddenly, as we sit together, there’s this great feeling of unity and togetherness. After one session, one woman said: “I don’t know, but I feel so united with you all!” Thanks to this way, thanks to all who came before us, to all our elders who sat in circle. 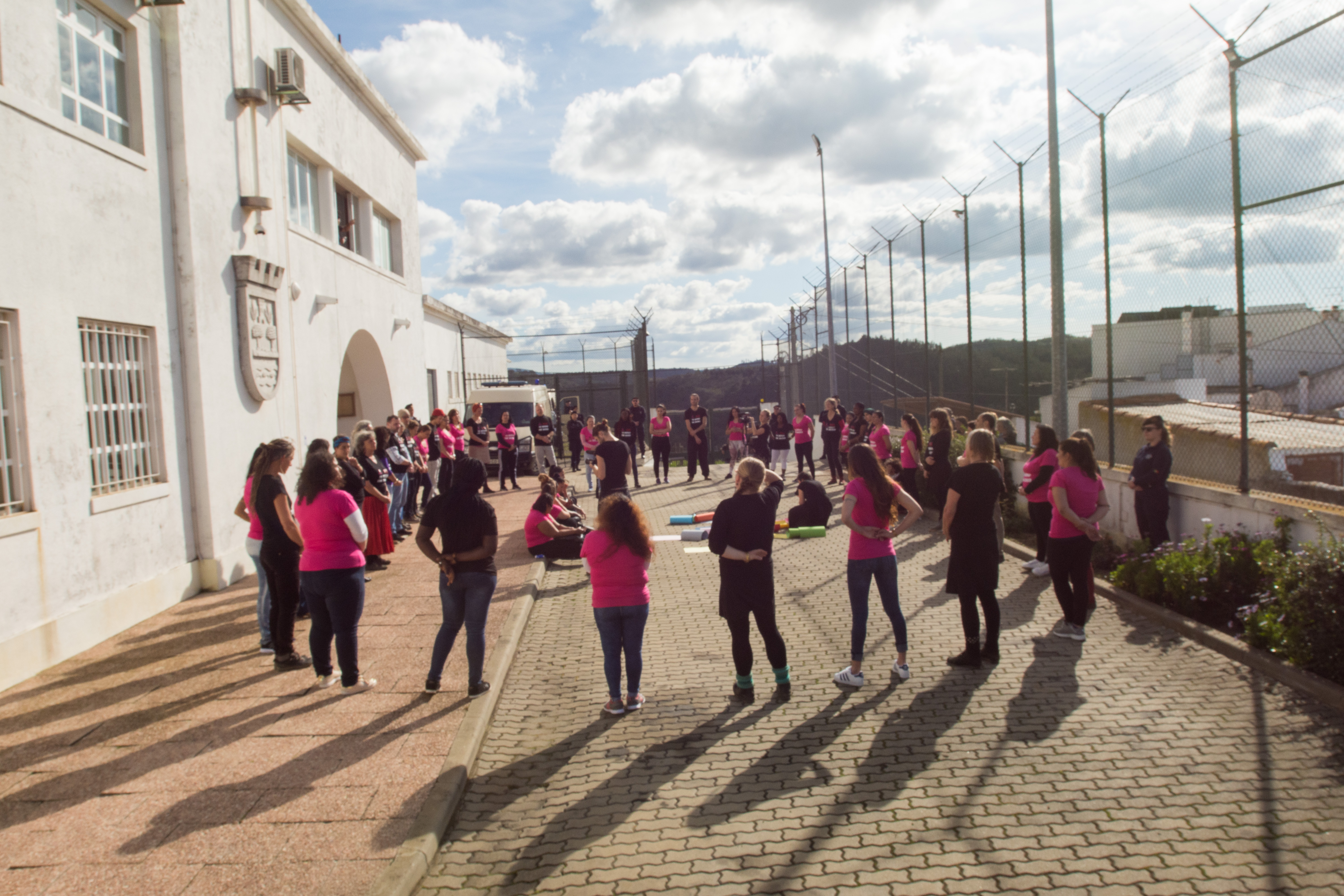 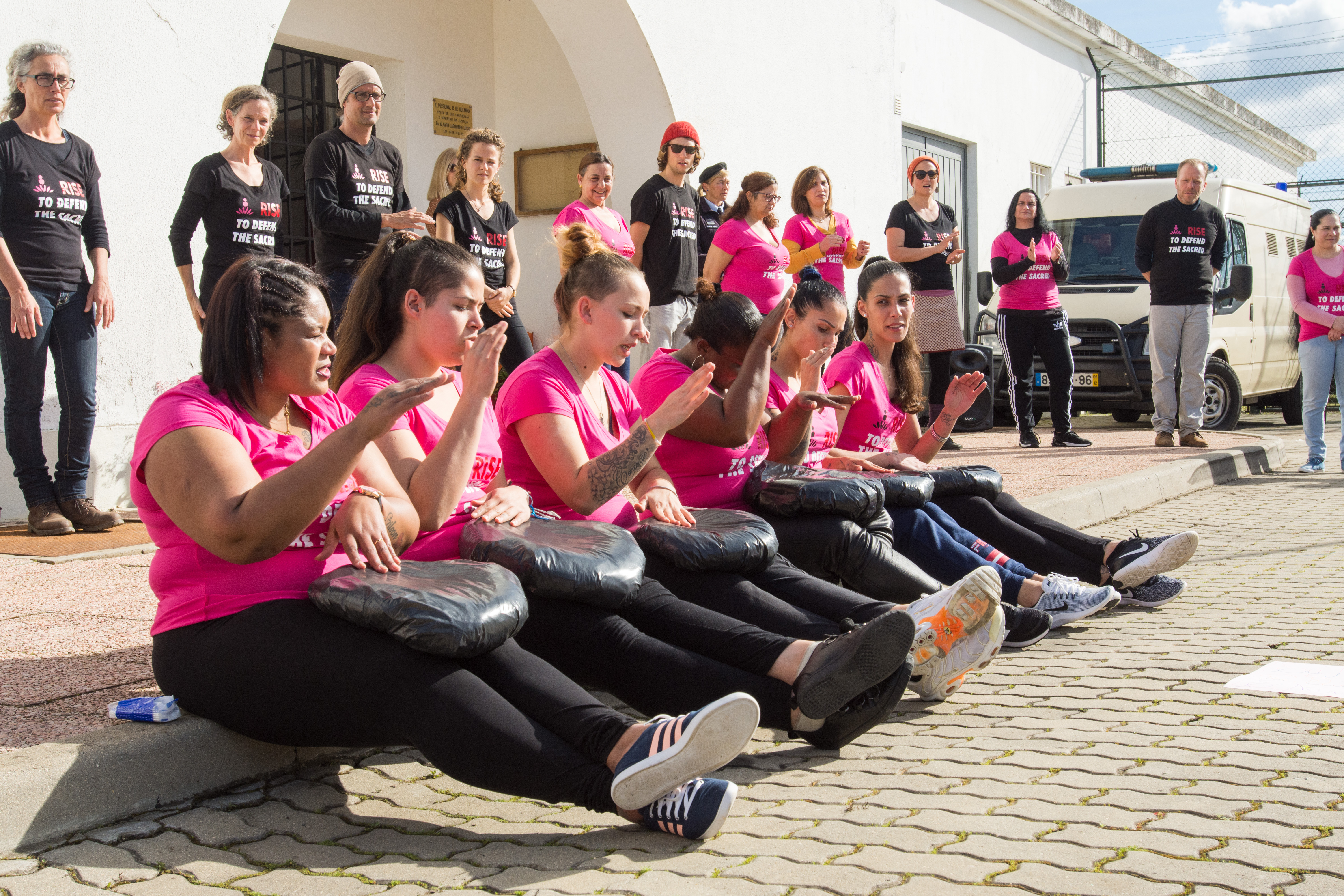 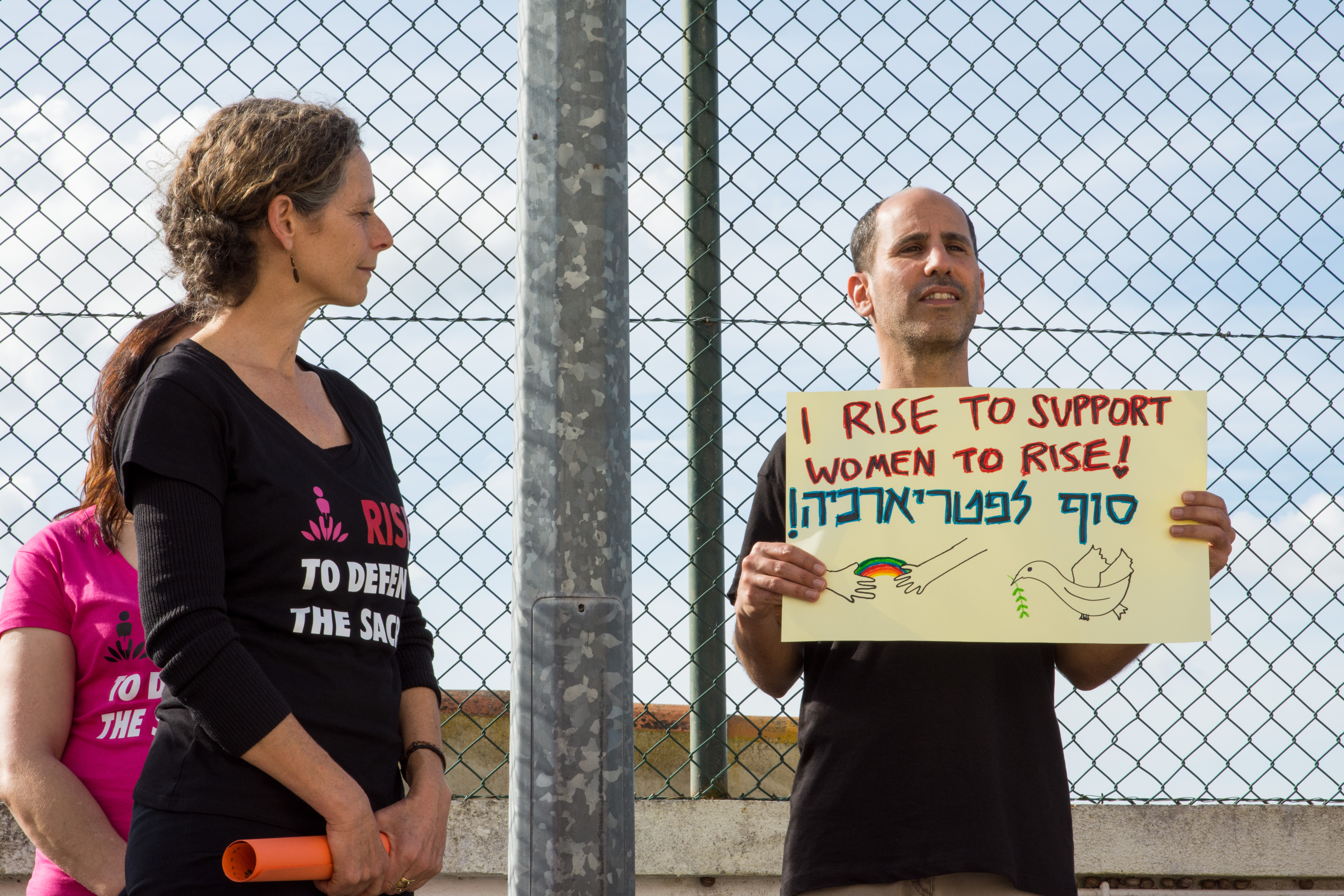 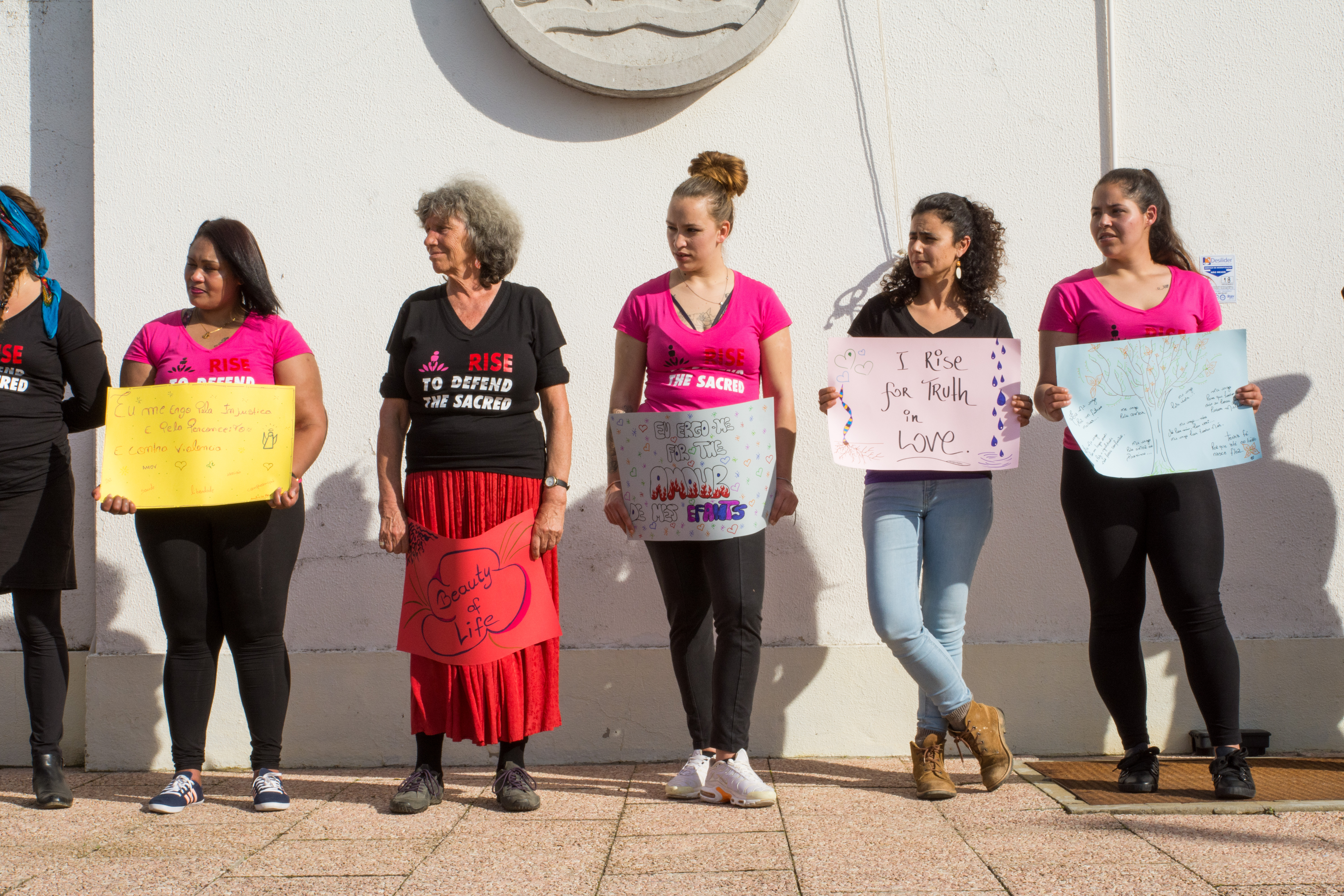 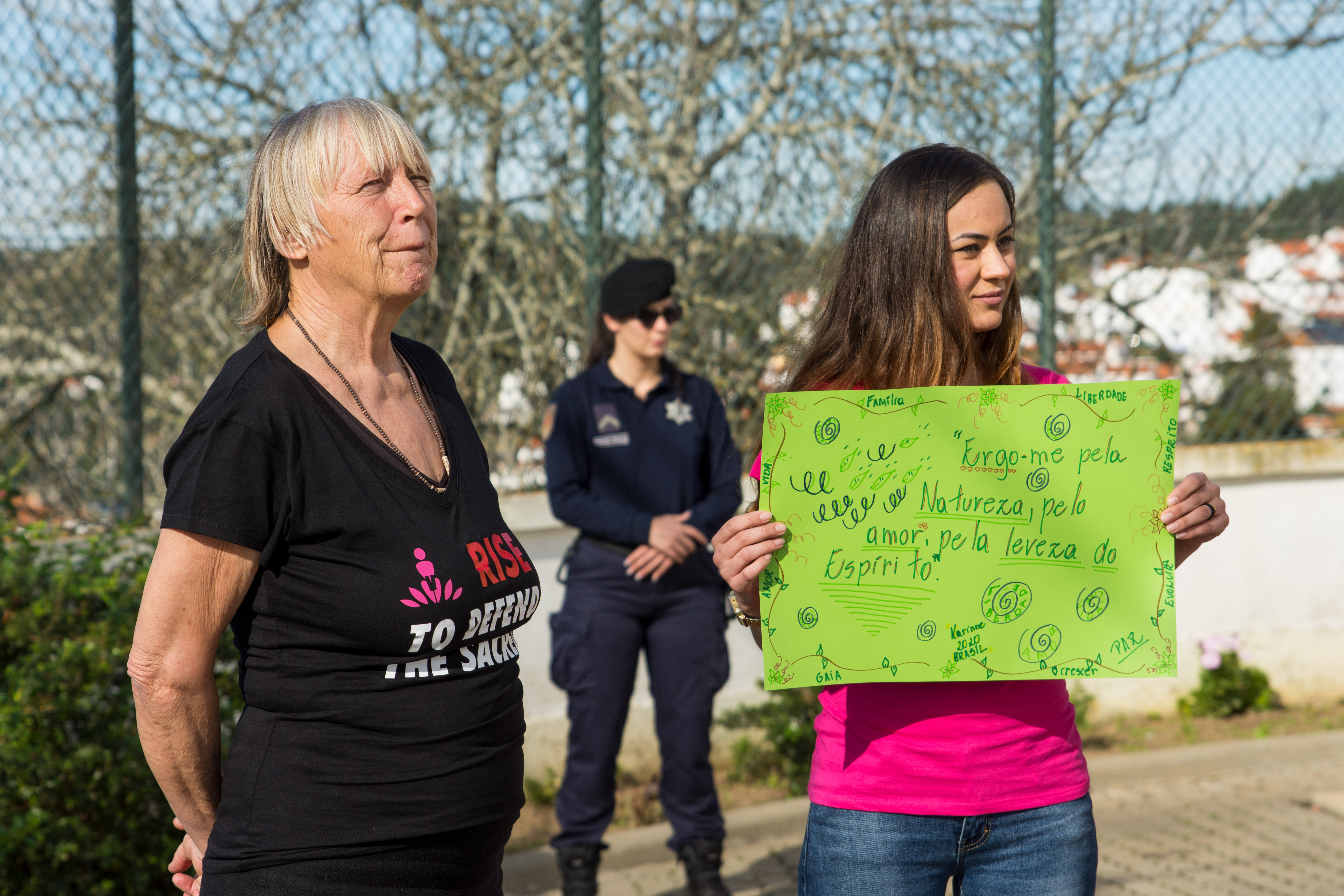 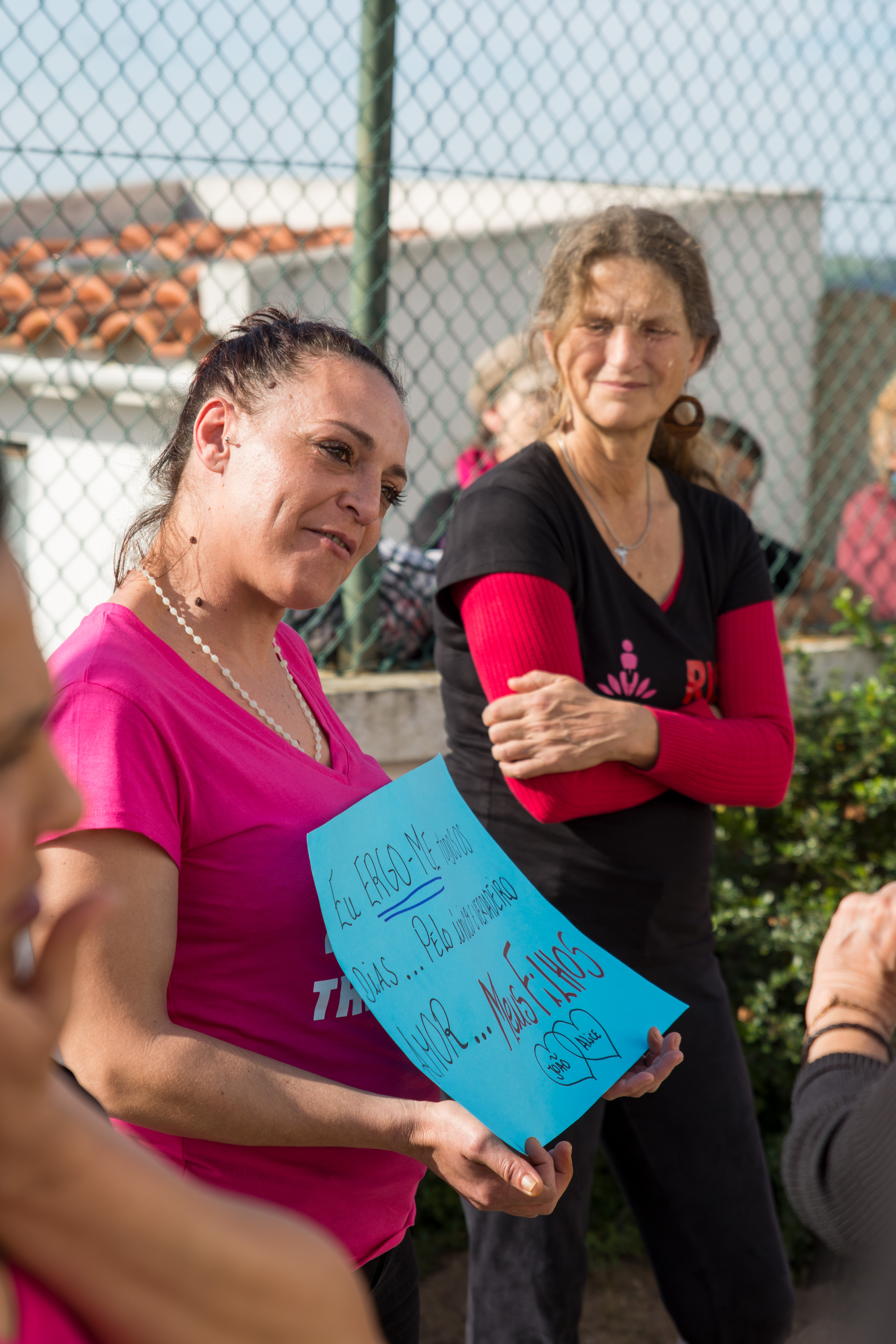 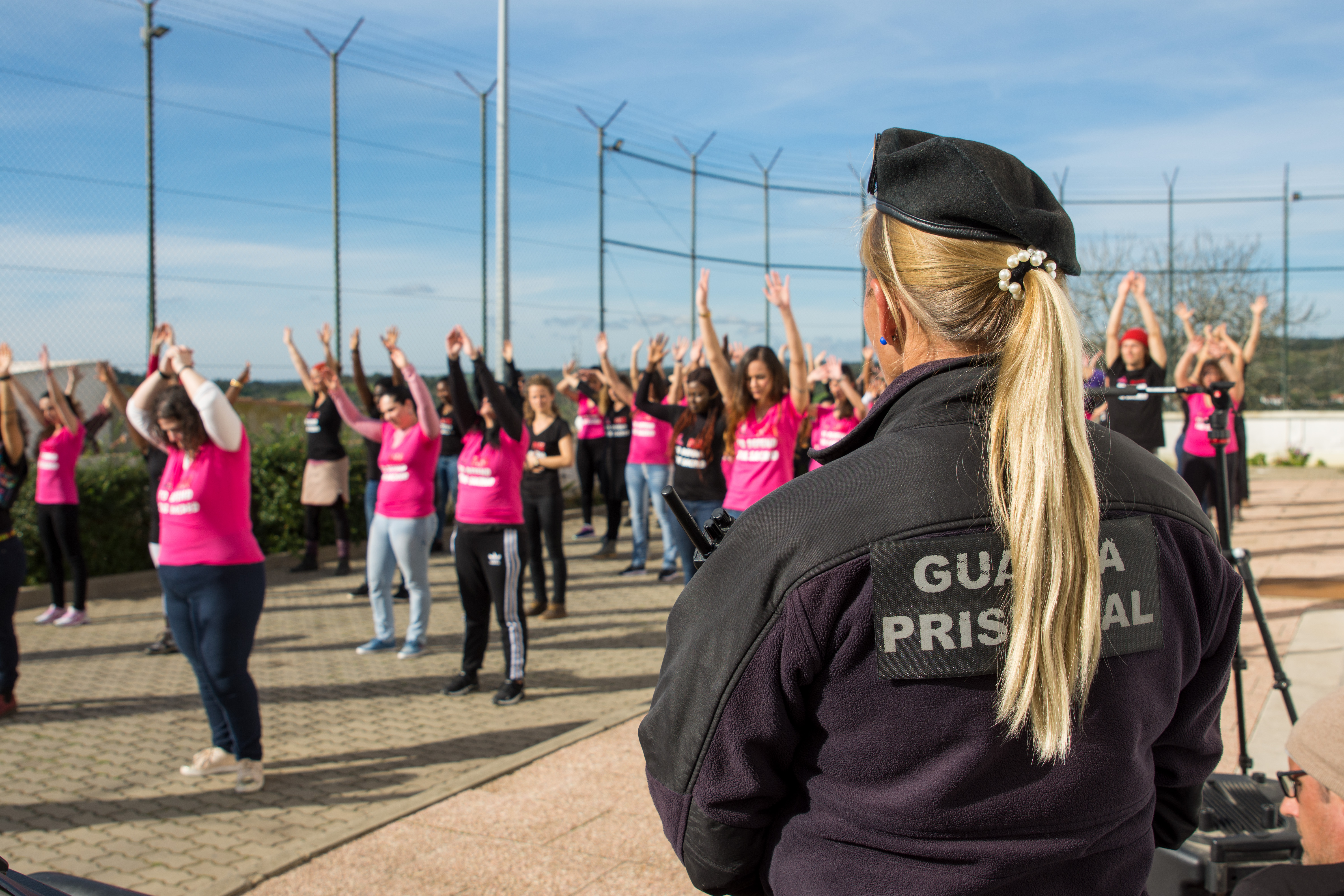 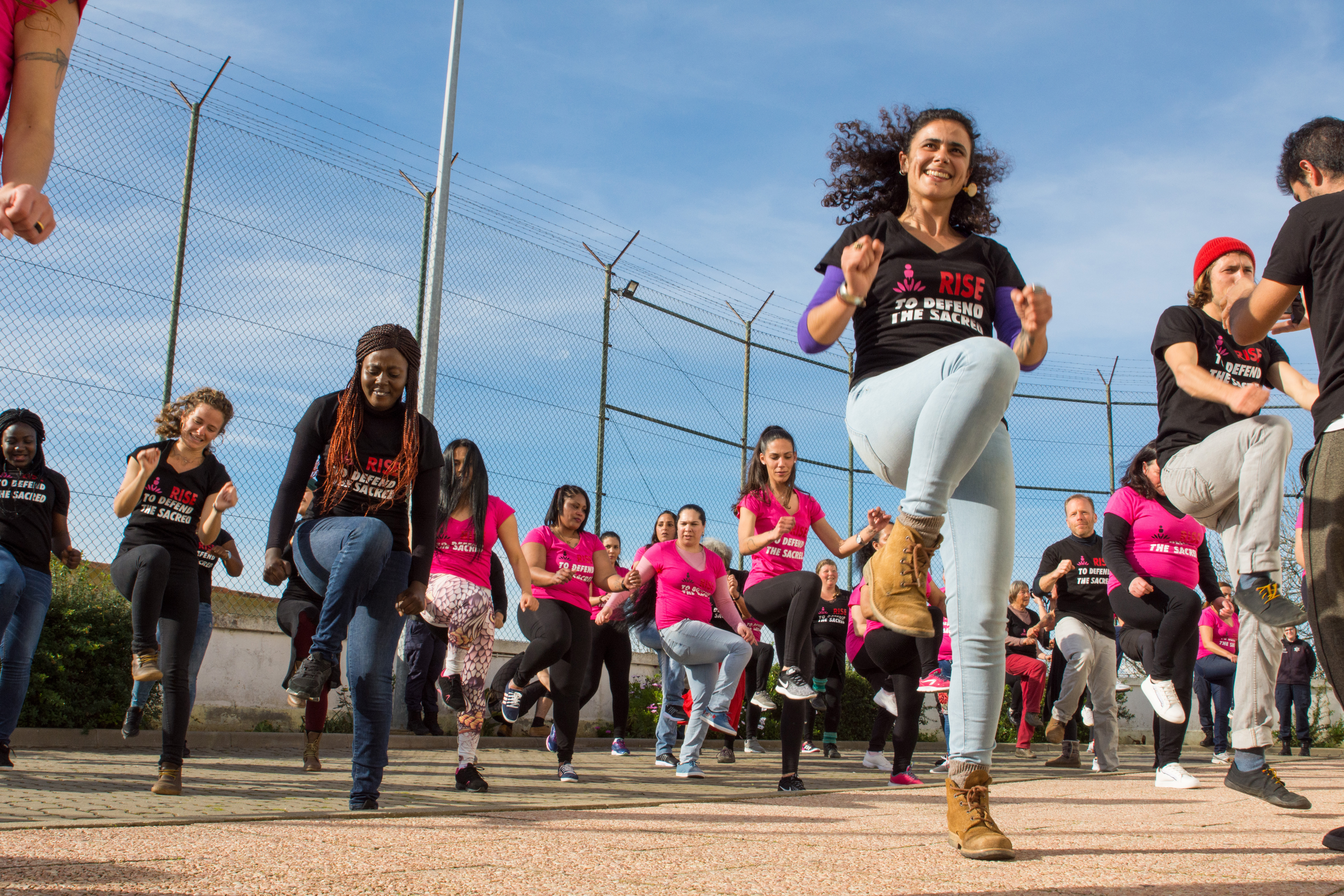 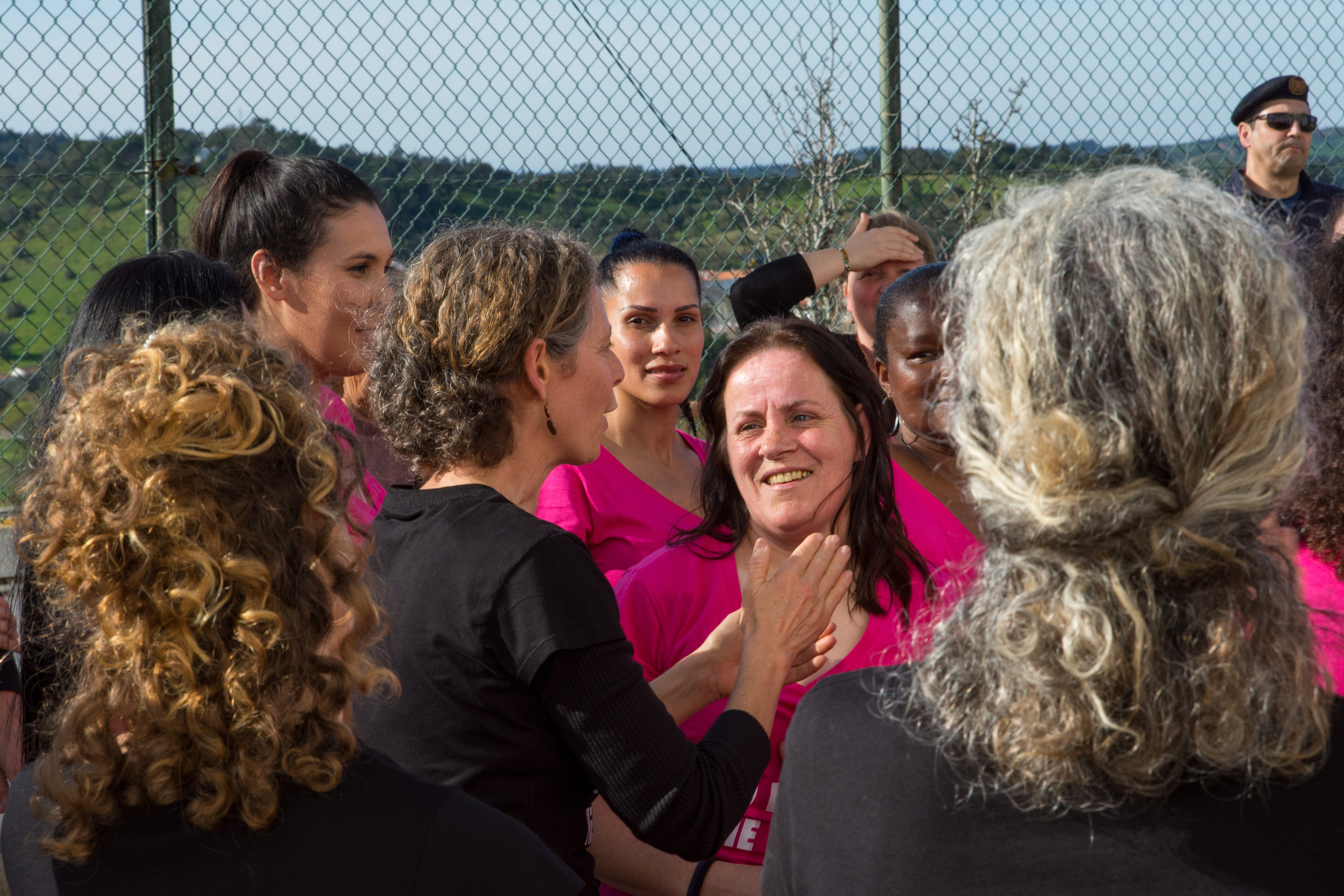 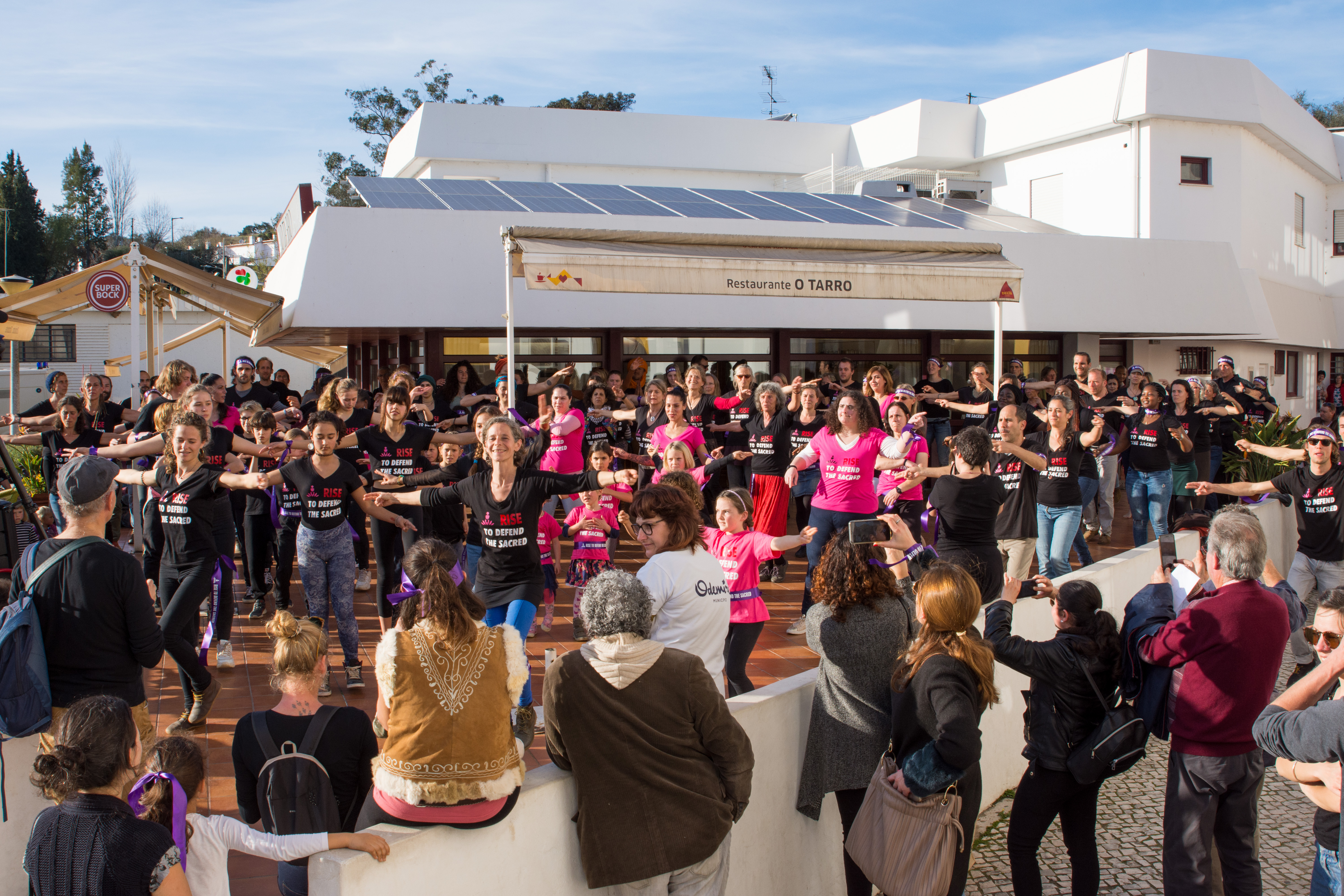 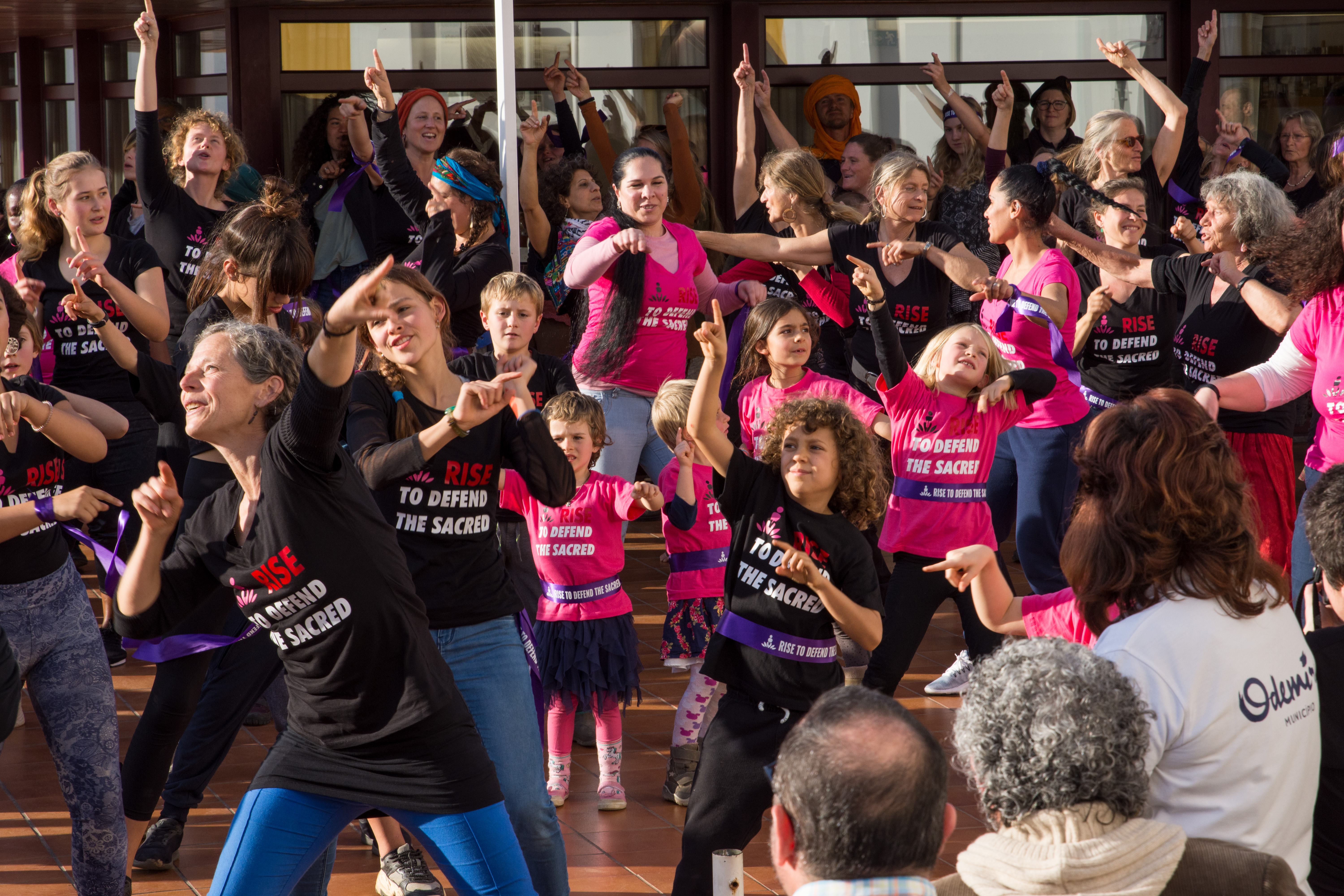 What Does “Freedom” Really Mean?

It’s been fantastic to see how quickly and well they’ve picked up the choreography. They know the whole world is dancing “Break the Chain” and that they can be part of a global movement by performing this dance. These women have such passion and power. When they do the “break the chain” move, it is so different. “Break the chain” has deep meaning to them. They have no time to hesitate, they just need to rise and bring their voice. I’m so privileged – even just in the sense of having the freedom to go wherever I want and do whatever I want. So, I’ve been thinking a lot in these last weeks, “What do I do every day? Does it serve me, us… the world?”

You have to imagine that when you enter the complex, you’re checked like in an airport. One time, after we finished and wanted to leave, one woman said, “You make me feel so free although I’m still in prison!” After I left the prison that day and heard the heavy iron doors closing behind me, I stood there and asked myself, “Am I free now? What does ‘freedom’ really mean?” She was free in these one and a half hours we spent together. But how do I, as a white privileged woman, deal with that? How do I live it and support others living it?

Manitonquat writes, “To help a human being change and become human, we need pride, self-respect and hope – those are effective and productive in helping someone to his full humanity.” Those are the qualities I’ve seen rising in these women over the last weeks.

I’m so grateful that this is possible. I’m grateful to this community, because every Friday, we can come back to community. The community holds us and teaches us – it’s only because of community that I’ve become who I am today.

I will conclude with a quote by Tamera’s co-founder Dieter Duhm about revolution. I consciously want to place a male voice in the context of this burgeoning women’s movement – to honor him and all men who stand in respect and support for our liberation as women. He writes, “We need a revolution that accepts spirit, lust and love, the right to life for all beings and the right for humanity’s religious longings. We need a revolution that helps the poor, the exploited and the oppressed, the children, animals and all creatures that so urgently need our assistance today. It is about fundamentally transforming our concept of a humane society. It is a matter of changing from murderous mechanics to compassionate solidarity and assistance. We need a revolution whose victory will create no losers because it will achieve a state that benefits all.” (From the book, “Terra Nova: Global Revolution and the Healing of Love”).